A Round Up of Digital DNA

Joanne has over 10 years’ experience working in digital analytics, executing and managing many large scale projects across the UK and Ireland. Joanne is also an experienced trainer, having developed many customised corporate training schemes and regularly speaks at digital and analytics events.
Company Updates
June 10, 2016
Share on Facebook Share
Share on TwitterTweet
Share on LinkedIn Share
Send email Mail

On Wednesday 8th June we attended the Digital DNA event in St. George’s Market, Belfast. Digital DNA is a leading business and technology event which has been held annually in Belfast, since 2013. The aim of the event is to give businesses the skills, knowledge and understanding to implement digital technology into their operations. This is done by showcasing digital leaders and what actions they have taken to help them grow and engage with their audience. Many businesses were in attendance at the event including Kainos, Randox, Uber, Deloitte and many others, with some of these businesses carrying out workshops.

We attended two afternoon workshops; Facebook advertising secrets undertaken by Dokoo and a LeanIn Belfast Panel Discussion on the issue of the sticky floor. The purpose of the Dokoo workshop was to allow businesses to find out how to best use Facebook advertisements and how to gain maximum benefit from using Facebook ads. Within the workshop, it was discussed which ads give the best results and what content works the best in ads, with videography being raised as the best content to use. One of the tips that Andy shared, was not to use the ‘Boost’ button beside a post on Facebook, and instead to use Facebook Adverts Manager instead, as the boost button is a quick way for Facebook to use your money.

The notion of the sticky floor workshop involved a panel discussion, where the topic of what holds women back from leadership was discussed. LeanIn Belfast partnered with Digital DNA to host this panel discussion in support of gender equality in the workplace. The panel was hosted by Sarah Travers of Bespoke Communications, and a former BBC journalist, to explore the notion of the sticky floor which is when women hold self-limiting beliefs, assumptions and behaviours that can curb their ability to achieve their career goals and bring their greatest gifts and value to their teams and organisation. The panel consisted of a range of people, including both women and men who work all throughout the world. Throughout the discussion, the women discussed many of the barriers they have faced through becoming a leader, including Sinead O’Sullivan who is the CEO of AviOptix and an ex-Nasa employee. Throughout her career, she said that loneliness was often her biggest barrier as she was the only woman in her job. Nicola McCarthy, a senior broadcast journalist and Manchester City Football Club, also spoke about her struggles in the male dominated industry. Football is mainly seen as a sport for men, however Nicola spoke about combining her passion for football with her passion for journalism and pursuing her dreams. She encouraged the audience to also pursue their dreams and not let anything hold them back, as nothing is more important than being happy in a job role. The issue of gender pay gap was also discussed, with Damian Cranney, CEO of Big Motive, saying that the women in his business are often paid more than men, but not because of their gender, because of their position within the business. He said that women are often in higher roles, due to their expertise and are therefore paid a higher wage. The panel welcomed questions from the audience as well, to make it a truly interactive debate, with many audience members expressing the barriers they had previously faced while trying to pursue their dreams and reach their potential. All in all, a very interesting debate! 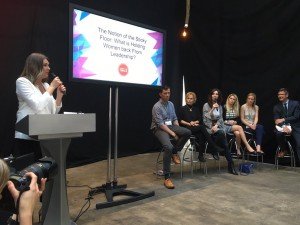 Google Surveys is one of the most recent additions to the lineup of products available within the Google Marketing Platform, allowing you to easily create and publish online...

Tracking outbound links in Google Tag Manager is not a new topic - we've written a guide explaining how to do it before - but there is a more efficient way to do it nowadays. ...

Server Side Tagging in Google Tag Manager – What is it? Should we use it?

Google Tag Manager is one of our favourite tools which allows us to control all our advanced tracking and conversion pixels from within one interface.  Until now, GTM has been a...