Joanne has over 10 years’ experience working in digital analytics, executing and managing many large scale projects across the UK and Ireland. Joanne is also an experienced trainer, having developed many customised corporate training schemes and regularly speaks at digital and analytics events.
Company Updates
November 28, 2018
Share on Facebook Share
Share on TwitterTweet
Share on LinkedIn Share
Send email Mail

Earlier this month we attended the Google Partner Summit in San Francisco and although most of what was discussed was confidential and under NDA, we’ve made a list of some general observations around recent developments that should help demonstrate to you, the direction in which the Google Marketing Platform is heading. 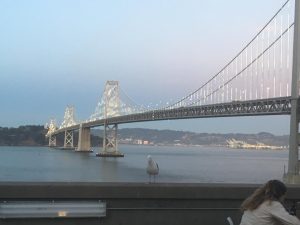 Taking Audience Targeting to the Next Level

Day 2 of the Summit started with a session called Next Level Google Audiences and Audience Management. Some of the more interesting stats that we took note of were the types of display advertising targeting that really demonstrated results. For example, a study carried out by Google found that there was an uplift in sales by 10% when using in-market targeting, 20% when using audience expansion, 40% when using similar audiences with remarketing, and a massive 50% uplift when using the custom intent option!

Targeting on the display network has certainly improved within the last year- we already mentioned in our previous blog on Day 1 of the Summit how not only can we now aim to track instore visits through Google signals, we can use the same to track people who visit gyms, business schools, hair salons, and many more places on a regular basis- going beyond the traditional contextual or search based targeting.

Discussions of The Self – Advertising Gets Philosophical!

One interesting point that was raised during the session was the authenticity of Google advertising when compared to Facebook advertising, arguing that we are our ‘real’ selves on Google i.e. the things we search for are real but when we are on social networks we aren’t our ‘real’ selves, but portraying the type of person we want to be seen as and thus marketing to people on social may be advertising to the user’s aspirational self, rather than the actual self. Session quality and conversion probability reporting were discussed, and how Google’s machine learning uses mostly language, location, interests, and site visits as attributes to power prediction, specifically allowing DV360 to uncover the Identify (the who), the Intent (the why) and the Intelligence (predicting what will happen).

After lunch the same theme followed into the evening with a session discussing a full funnel audience strategy, including demonstrating how you can use a range of Google products to help create and manage your funnel. This looked at using Google Analytics to help research a target audience, whittling the audience down into Sales Force to get prospective customers back, then using Google Search, Display, and Video platforms to get target new visitors, Google Surveys to run ad hoc consumer research, before using Google Optimise to deliver a customised site experience. 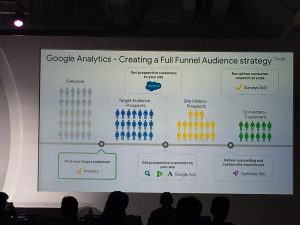 The last session of Day 2 demonstrated how Google Analytics products were used to measure TV. How? A relatively simple methodology of using a blend of TV Spots, Google Analytics and Google Search.

This study used Bayesian Inference with Gibbs sampling to combine and analyse the data – this then showed incremental searches and visits attributed to TV spots. Key points of consideration if running a test like this emphasised the importance of having a baseline figure on traffic before conducting the test, as well as considering seasonality and natural demand. 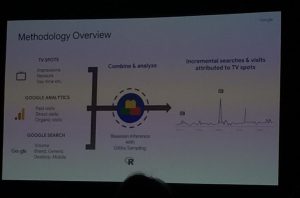 An Immersion day followed Day 2 of the Summit. The opportunity to meet the teams that created and continue to support Google Data Studio, Tag Manager, and Optimise, was priceless as it gave us a chance to troubleshoot any specific queries we had on client accounts and sign-up to a range of betas. It also allowed us to see what has been launched already (65+ public facing launches for Data Studio!), and what’s coming down the line.

Highlights on the Optimise side included:

Highlights on the GTM side included:

*…admittedly they carried out a poll and this was voted one of the most popular features by fellow partners, and also a favourite of mine – not a feature they confirmed would be coming, but here’s hoping! 🤞

← Prev: Google Marketing Platform Partner Summit 2018 – Day 1 Next: What is FBCLID? How To Remove FBCLID parameter from Google Analytics →

Six Steps to Smooth Transition from UA to GA4 in 2023

Happy New Year! 2023 is the year that GA4 will officially become Google’s main analytics product with Universal Analytics scheduled to be sunset. On July 1, 2023, standard...

We say this every year but this year really has seen a lot of exciting changes (and a few challenges too) in the world of digital marketing and analytics. So this year we asked...