Twitter is very much a real time platform, which allows you to reach existing and potential customers as you develop your business and brand. It has become an increasingly flexible way for companies and brands to interact directly with customers, for example, a major US airline receives 100,000 questions, complaints, and comments a month from Twitter users according to Twitter internal data (November 2015).  Immediate responses to customer complaints and comments, allowed by the real-time aspect of Twitter, increase customer loyalty and revenue with internal Twitter Research suggesting that if the company responds to a Tweet in less than 6 minutes, the customer is willing to pay almost $20 more for that airline in the future.

So, with Twitter growing in strength as a platform for customer and company interaction, why not take this further and reach an even wider audience through Twitter advertising. With Twitter advertising, promoted tweets allow you to place your best content in front of the audience who matters to you right now and increase brand awareness and customers in a social setting. 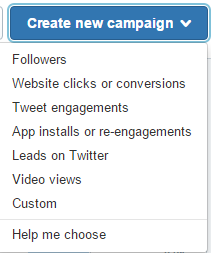 There are 7 different campaign types so you can choose one that best suits your marketing objectives. In this post we will focus on a popular campaign type; Website Clicks and Conversion.

In addition to demographic and geographic targeting you can choose from a wide range of targeting options to ensure your ad is shown to the people who you want to target. Target by:

There are 3 targeting options that are particularly relevant and useful for a website clicks and conversions campaigns:

Keywords
Targeting keywords shows your ads to people who search for, or are using the 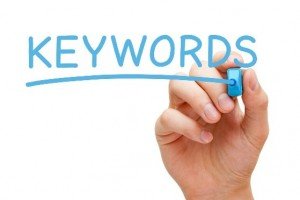 keywords while tweeting. We have found a lot of success in the past in using hashtags as keywords to target people. Targeting hashtags is where the real time effect of twitter advertising really comes into play. Consider for example, you ran an ad offering singing lessons and targeted the hashtag #xfactor. As #xfactor grows in popularity during air times your ad could be shown to more people who are potential customers and are showing interest around that subject.

Followers
Targeting followers can also prove to be very useful. This involves targeting the followers of twitter handles such as an individuals or businesses.  For example, if you target followers of popular makeup artists showing an ad for make-up, you are likely to reach people who would be interested in viewing your ad.

Writing your tweet
Twitter ads stick to the same character restrictions as tweets and though this limits your ability to describe your product or service in more detail like on other channels, it makes a tweet snappy and engages customers quickly.

Twitter cards allow you to include a picture and a headline along with your text (example below), which makes a tweet very appealing and on average gives a high CTR 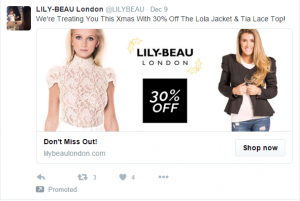 – Create 3-4 tweets per campaign to maximise engagement
– Use a clear call to action such as ‘Register Now’ or ‘Shop Now’.
– Urgency buzzwords such as ‘now’ and ‘limited time’ have a 10% higher link click rate

Be sure to check out our blogs on other social media advertising; Facebook and LinkedIn!