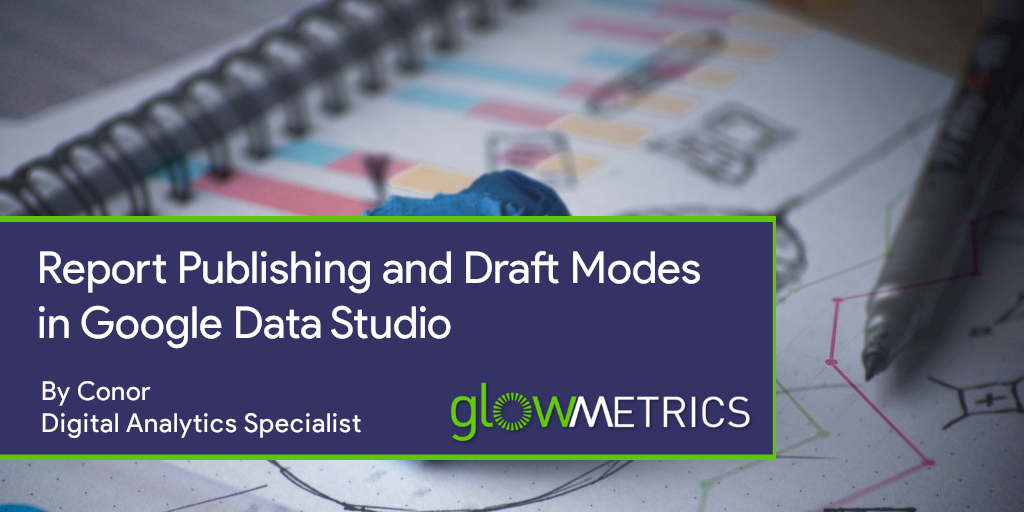 The number of updates to Data Studio in recent weeks and months is quite staggering, with fantastic improvements, big and small, being brought to the platform on almost a weekly basis, and you’d be certainly forgiven for missing some of the more subtle additions. Hopefully, we can help by highlighting some of the best new features as they’re launched on Google Data Studio. This week, we’d like to focus on the new Report Publishing and Draft Modes.

Report Publishing and Draft modes allow you to work on your dashboard without those changes being immediately public, and without viewers seeing your fixes, changes, and general report construction in action. This comes as a huge relief to anyone who has had to swap out pages, create duplicate dashboards, or answer the question “Why is everything on this report moving around the screen like it’s been possessed by some sort of spirited data visualisation ghost?” Maybe that last one isn’t as regular an occurrence… but you get the idea!

The first steps into a full draft feature came with the addition of the option to hide certain pages in your dashboard, which was a handy tool for testing and staging environments, and remains very useful, but this doesn’t offer the full security and peace of mind that the new capabilities allow. Anyone familiar with Google Tag Manager may be well versed in using draft and publishing modes, with these being a key part of the platform for many years.

So, onto the important stuff: What exactly is Report Publishing, and how can you use it?

Report Publishing lets you control which version of a dashboard viewers can access while allowing you to prepare and test future updates in the background. By default, dashboards are live at all times, which means that viewers can see changes you make in real-time. This makes for an uneasy user experience, and as an Editor, you may be reluctant to make significant changes to the dashboard while it’s being used. You need to enable Report Publishing by clicking on the File Menu, then Publishing Settings, and finally activating the feature. With Report Publishing switched on, you can work on a draft version of your dashboard while viewers see the published version.

Switching between Published and Draft Versions

With Report Publishing activated, you now have access to the Draft Version of your dashboard. This mode is exclusive to report Editors and acts as a staging environment for future versions of the dashboard. You can toggle between the Published and Draft Versions by clicking on the drop-down menu next to your report title, and selecting the version you’d like to view. Here, you can also access the version history and backup dashboards. We’ll come back to this later with a handy little bonus tip, something to look forward to.

Drop Down Menu for Draft and Published Versions

Don’t forget that you still need to publish the new version of your dashboard once it’s ready for the Viewers. To publish your updates, you need to click on the Publish button in the top right of the Data Studio interface, next to the Share menu. It may seem trivial, but it’s easily missed. As the saying goes: With great new features, comes added responsibility.

We promised we’d come back to this, and while it may only have been a couple of paragraphs, here we are. The Version History menu allows you to restore and revert to previous iterations of your dashboard and see who has made changes and when these occurred. It’s been a feature for some time now, but this has also been recently updated with a tool that complements the new report publishing and draft modes.

In the Version History menu (you can access this from the same drop-down as Draft/Published versions, or in the File tab), you can now name the different versions of your dashboard, rather than relying on the default timestamp title for identification of iterations. 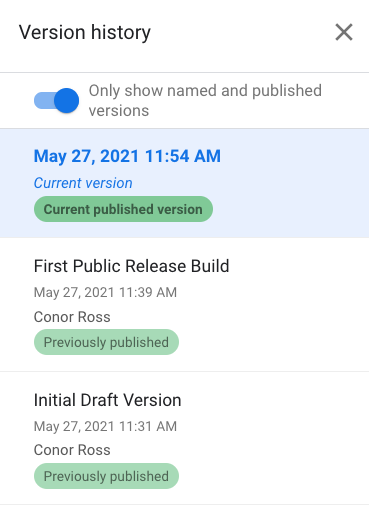 You can also toggle the list to show all versions of your dashboard, or only the named and published versions. This is a great addition to keep track of the critical builds and releases of your reports and dashboards.

It is as simple as that. A small but significant feature that can change the way you work on dashboards and reports in Google Data Studio. As an Editor, draft versions allow you to present more polished updates without the hassle or concern of impacting the user experience for Viewers. You just need to remember to activate Report Publishing (and to publish your updates!)

For more on data visualisation and Google Data Studio, please feel free to leave a comment below or contact us at [email protected]. You can also follow us on Twitter @GlowMetrics for more tips, guides, and up to date news in the world of Digital Analytics and Marketing.

← Prev: Rise in Direct Traffic & New Users in Google Analytics? It Might Be ITP... Next: How To Pull in Header Text as a Variable Using Google Tag Manager →