Rise in Direct Traffic & New Users in Google Analytics? It Might Be ITP… 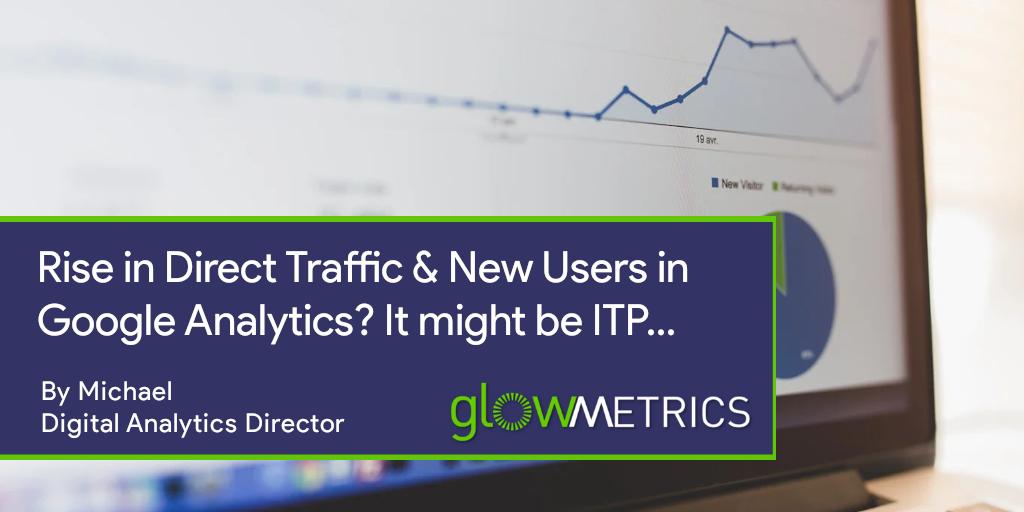 Have you noticed a significant increase in Direct traffic in your Google Analytics account recently? Maybe it’s coincided with a drop in Organic traffic? This is something we’ve seen happen quite significantly for a number of our clients – in particular over the last couple of months – so we decided to investigate further.

Below you’ll see a proportionate visualisation of traffic by channel over time – prior to Feb 2021, Direct traffic accounted for roughly 10% of the total each month.  Since then, it now accounts for just over 30% of the total.

As you can see in the example above, there was a sudden and sustained increase in Direct traffic around March 2021.  Nothing changed with the tracking implementation on the site around this time, so why has this happened?

On further analysis, we saw that in March/April 85% of Direct traffic came from a Mobile device, 90% were using the Safari browser and more specifically, 87% were using Safari version 14.0.3!

What is Intelligent Tracking Prevention?

PRO TIP: the best place to keep up-to-date with the most recent tracking protection mechanisms implemented by major browsers is cookiestatus.com

Why does ITP cause an increase in Direct traffic in Google Analytics?

One of the key points is that WebKit restricts the lifetime of JavaScript cookies to a maximum of 7 days – and in some instances, it can be as short as 24 hours.

If we also consider the attribution model that Google Analytics uses – Last non-Direct Click – prior to ITP, someone could find your website via an Organic Google search for the first time, come back within TWO YEARS by typing the address into their browser directly and that second session would still be credited to Organic due to the attribution model (Last non-Direct, remember?)

Now, thanks to ITP, if they come back more than one week later, it’ll be considered Direct traffic because there is no longer a cookie linking that session back to the original non-Direct session – it’ll have expired after a maximum of 7 days.

Why does ITP cause an increase in New Users in Google Analytics?

It’s the same story here I’m afraid… now that those cookies only last for up to 7 days – if someone comes back again more than a week later, they’ll be seen as a totally new user even if they’re using the same Safari browser and device they were previously.

So what you’re likely to see now in Google Analytics is a big increase in perceived New Users and much less transparency over the original source of that traffic, with much more lumped into Direct because we no longer have the cookies to tell us which channel that user really came from in the first place, specifically if they’ve returned to the site again Directly a second (or third or fourth…) time.

This will be particularly noticeable if you run an ecommerce website selling high value items with a lengthy time lag from first visit to purchase i.e. if your users visit your site, go off and think about it for a week, compare prices elsewhere then finally come back to buy three weeks later, you may find it much harder now to properly attribute sales to the original acquisition channel.

Have you noticed a similar increase in New Users & Direct traffic in recent months? If so, let us know in the comments below!

← Prev: Getting Started with Structured Data Next: Report Publishing and Draft Modes in Data Studio →